FEDS TO QUIT MESSING WITH YOUR GRITS
By Don Surber, December 08, 2018 DonSurber@gmail.com 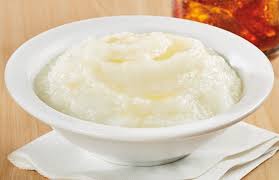 As a Northerner, all I know about grits is you have to be a Southerner to understand them. Yes, I have had them. I was in the Army, remember. I would never mess with anyone's grits.

The Obamas did. They slapped federal rules on school cafeterias that may have been OK at Sidwell Friends School but were a disaster elsewhere.

President Trump, naturally, is ending this nonsense. The Associated Press got to the heart of the matter, which was a requirement that only whole grains be used. There were other stupidities as well, but my understanding is this was the deal breaker.

I get that childhood obesity is a problem. What I don't get is why it is the government's problem.

Furthermore, if it is the government's problem then first fix the government program that most enables obesity: food stamps. Ban using them to buy potato chips, candy and soda. We already ban alcohol and cigarettes. Banning snacks should not be a problem.

But the government never really solves a problem because problems are merely an excuse to expand government.

President Trump is rolling back the rules. He is letting school cafeteria workers set the menu.

The Bush administration has environmentalists howling, again, due to last-minute changes to federal rules. New rules will speed oil shale development by 2 million acres in the West. There will be an auction for drilling rights near three national parks, changes to the Endangered Species Act, and an exemption for large farms regarding air pollution reporting. It is hardly unprecedented as the outgoing administration tries to put rules in place that the new administration wouldn’t go for.

One of the more controversial rule changes involves the Endangered Species Act. The changes, which environmentalists view as significant, would eliminate the requirement to conduct an independent review by either the U. S. Fish and Wildlife Service or the National Oceanic and Atmospheric Administration of any federal project that could affect a protected species. The rule states: “Federal agencies are not required to consult on an action when ... the effects of such action are manifested only through global processes and (i) cannot be reliably predicted or measured at the local scale, or (ii) would result at most in an extremely small, insignificant local impact, or (iii) are such that the potential risk of harm to species or habitat are remote.” Environmental groups’ lawsuits forced the federal government to list the polar bear as threatened because of claims global warming is causing their ice-floes to melt. Interior Secretary Dirk Kempthorne cautioned it should not be an excuse to regulate “greenhouse gas” emissions, however. John Kostyak of the National Wildlife Federation views the rule change with a jaundiced eye. “The agencies that are pushing these projects through are inherently biased…[and] they don’t like delays associated with endangered species,” he said.

Reprinted by permission from the Dec. 4, 2008 issue of Liberty Matters News Service.  www.libertymatters.org

The Departments of Agriculture, Interior, and Commerce and the Environmental Protection Agency account for 44 percent of all the rules in the Agenda. 787 of the new regulations affect small businesses. Congress must require agencies to reveal the costs of regulations; a "regulatory report card." Congress must also stop delegation of legislative power to unelected agency personnel and assume fiscal responsibility to end "regulation without representation." ".... [m]aking Congress directly answerable to the voters for the costs that agencies impose on the public would best promote accountable regulation," states the report.

Immediately after his inauguration, President George W. Bush began the long tortuous journey of undoing the damage done by Bill Clinton throughout his term, but particularly in his last days in office.

He signed an Executive Order putting on hold the publication of any proposed regulations in the Federal Register for at least 60 days until his administration had an opportunity to review them.   Since the regulations establishing roadless areas on federal land were published before President Bush took office, they were not affected.  However, the Associated Press (AP) reported on Feb. 5, 2001, that those rules have been delayed from March 13 to May 12.  While President Bush can't block or alter these rules without going through a new rule-making process, the delay would allow Congress to rescind the regulation under a never-used 1996 law.

In another  AP story of the same date, it was noted that two days before Clinton left office, federal officials sent out a memorandum specifying how landowners must meet the Endangered Species Act if they use federal lands to access their private property.  This action can be undone by issuing a new memo reversing the decision.

On another front, US District Court Judge Royce Lamberth issued an injunction forbidding the Clinton Environmental Protection Agency from chucking down the memory hole crucial information about how the agency went about its business in the final days of the Clinton-Gore administration.  This action was taken at the request of the Landmark Legal Foundation which had filed a Freedom of Information Request in Sep. 2000 seeking the names of any third parties or outside interest groups the EPA had talked to with respect to the flurry of last-minute regulations, the Wall Street Journal reported on Jan. 25, 2001.  The request, which was supposed to have been responded to in 10 days was simply ignored, prompting the lawsuit.

There are at least eight bills which have been introduced in both the U.S. House and U.S. Senate to block the immediate implementation of the "Know Your Customer" proposed regulation.

The FDIC received about 225,000 comments on its proposed rule as of the last day for comment in contrast to the usual dozen or so. All but a few were opposed to the adoption of the regulation which would require banks to develop "profiles" on all of their customers and report to various government agencies if an unusual activity took place. The Associated Press quoting the head of the FDIC, Donna Tanoue, in an article on 3/9/99: "The public has spoken very loudly and clearly."

While Sen. Abraham has not taken a position on this rule, the Senate in an 88-0 vote on 3/5/99 expressed support for a measure directing the regulators to drop the proposed rules. Senate Democrats blocked a vote on adoption of the measure, so it lacks the force of law. Since it is probable that this issue will be before the Senate again in one form or another, it would be worth while to let his office know of your views. His aide in Saginaw is John Potbury, (517) 752-4400, Fax (517) 752-4492, e-mail: John_Potbury@abraham.senate.gov

You can reach Sen. Abraham's Washington office by contacting the switchboard, 1-202-224-3121 and asking for his office, e-mailing at Michigan@abraham.senate.gov or by writing to the Saginaw office at 301 East Genesee St., Saginaw, MI 48607.

The bureaucratic name of this computer database is "Minimum Security Devices and Procedures and Bank Secrecy Act Compliance Program." The proposed regulations will authorize federal agents to inspect "all information and documentation" of accounts.

Current law already requires banks to report to the government cash transactions exceeding $10,000. The bank must complete a five-page report that includes the customer's name, address, Social Security number, driver's license or passport number, date of birth and information about the transaction.

The banks send this information to the Suspicous Activity Reporting System, a huge searchable database that went on-line in Detroit in April 1996, and is jointly administered by the IRS and FinCEN. This database shares its secrets with more than a dozen agencies, including the FBI, IRS, Secret Service, bank regulators and state law enforcement agencies.

The Know Your Customer regulation has been proposed by FDIC to go into effect on April 1, 1999. March 8 has been set as the deadline for public comments. Americans can comment on the proposed rugulation by writing to Robert E. Feldman, Executive Secretary, Attn: Comments/OES, Federal Deposit Insurance Corporation, 550 17th Street NW, Washington, DC 20429. You can Fax them at (202) 898-3838, or e-mail: comments@FDIC.gov.